The epigenetics of ageing

In most countries, we have witnessed a steady increase in life expectancy over the past few decades. In fact, the global average of life expectancy in 2015 increased to 71 years, in comparison to the one of 46 years in 1950 [1]. Even though that is the case, ageing is an inevitable event that affects most living organisms as time goes forward. Looking at it in the lens of most people, ageing is to grow old, have wrinkled skin and graying of hair, or even to have grandchildren. However, physicians and biologists perceive ageing as a complex multifactorial biological process, at which physiological functional decline takes place, hence increasing the susceptibility to environmental challenges and ageing-related chronic illnesses like cancer, metabolic disorders (e.g. type II diabetes), cardiovascular disorders and neurodegenerative diseases [2,3,4,5].

To identify potential therapeutic targets in an attempt to mitigate the process of ageing and the above mentioned conditions, there have been a lot of studies that aim to identify changes that take place due to this process. As a result, nine hallmarks of ageing have been defined and include genomic instability, altered intercellular communication, stem cell exhaustion, cellular senescence and epigenetic alterations and deregulation [6]. Together with other factors, those hallmarks paved the way to identify molecular events that lead to an ageing phenotype. 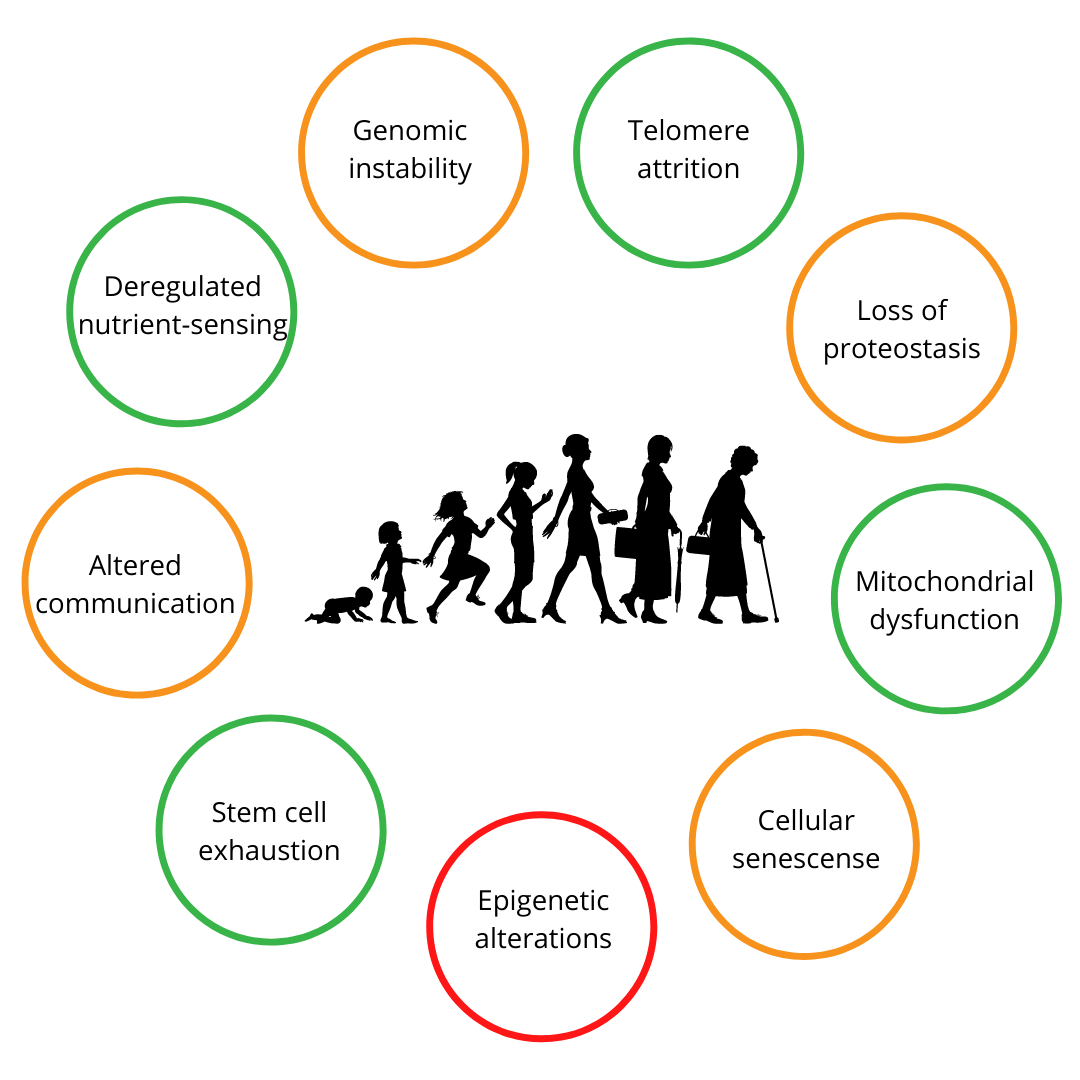 Considering the importance of epigenetics and the profound interest in developing therapies that target epigenetic processes, a lot of progress has been made in this field in the context of ageing. In fact, DNA methylation - a biological process by which methyl groups are added to the DNA molecule - has been used as an indicator of the chronological age of cells and tissues like blood, liver and kidney, and hence has been termed as the ‘epigenetic clock’ [7]. Additionally, changes in epigenetic patterns or what is known as ‘epigenetic drift’, is a well-known phenomenon that describes the gradual decrease of global DNA methylation as ageing takes place [8].

It is important to keep in mind that DNA methylation patterns are not fixed, they are reprogrammed at different stages of mammalian development. Those patterns can change in response to several external and internal factors. However, it is established that a global DNA hypomethylation (loss of methylation) takes place due to ageing [9,10]. This decrease in methylation is attributed to the progressive decline in the levels of the DNA methyltransferase DNMT1 [11]. Several genes exhibited altered DNA methylation patterns in ageing, for example genes for tumor suppression (LOX), development and growth (IGF2) and metabolism (ELOVL2), providing insight to the increased susceptibility to diseases [12]. 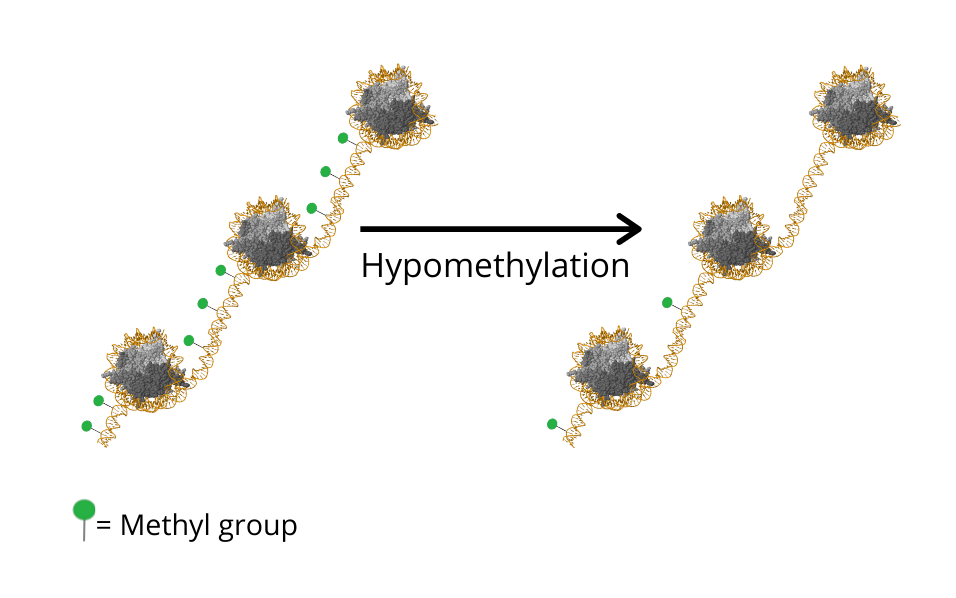 In a similar manner, ageing has been shown to impact the histone components of chromatin. Histones can carry a large number of posttranslational modifications leading to an enormous functional complexity, which is still not fully understood. Those modifications have been shown to affect a wide range of processes, for example gene transcription, DNA repair, DNA replication and the condensation of chromatin [13,14]. The most prominent modifications observed are methylation and acetylation of histones lysine residues [15,16]. The trends of ageing-related changes in histone methylation have been extensively studied. So does for example a loss of certain trimethylation marks on H3 lysines (e.g. H3K9me3 and H3K237me3) suggest a general loss of heterochromatic structure with ageing [17,18]. Additionally, advances in technology have outlined the possibility of extending lifespan in humans through sirtuins, a family of deacetylases with remarkable abilities to prevent diseases, and reverse aspects of ageing in mice [19].

Changes in heterochromatin - condensed DNA that is normally not accessible for transcription - were observed in several organisms, and it is considered a classical model to explain ageing [20]. The gradual loss of heterochromatic regions is mainly due to the loss of core chromatin proteins. This transition from highly condensed to mildly packed chromatin structures may cause cellular dysfunction. As a result, several consequences have been observed, including modified chromatin architecture, de-repression of silenced genes and global gene expression changes [21].

Ageing is a great example of a process where the study of epigenetics has made a lot of progress, and provided an explanation for many dilemmas. However, the majority of the changes that ageing causes have not yet been fully understood. Together with partners, EpiQMAx aims to develop epigenetic biomarkers that will help us further understand why and how we age.